Western progressive movements came to the fore in 2020, but after the year’s upheaval, it’s clear they are going in circles. For real progress, they have to look outside the Western bubble and realize where they stand.

The year 2020 came and went, leaving behind a much different world than ever thought possible just one year ago. Easily one of the most consequential years in modern world history, it has, among many other things, shown a mirror to the face of Western society – an image that one can no longer ignore. Progressive voices and prognosticators in the West are rightly calling people together to fight for a human future, arguing, philosophizing and shouting over one another. Instead, I think what progressive thought leaders in the West need to do is one crucial thing: listen.

The problems that the progressive forces in the Western world face are serious but not entirely unique; for example, China is masterfully dealing with its Big Tech question in a way Western progressives are still debating and it deserves serious consideration. Western progressives can also learn a lot from the popular protests against neoliberalism that emerged in late 2019 and later ended in serious concessions, as was seen in Chile and Lebanon.

Western progressives’ leadership, however, looks up instead of down, North instead of South and backwards instead of forward. It is a leadership that is ignorant of its own position within space and time.

This is to be expected. The leadership of the progressive forces in the West is composed of a generation told that it was born at the “end of history,” as Francis Fukuyama famously put it. The so-called defeat of socialism, i.e. the defeat of the progressive forces of history at the hands of capitalist realism (or the “Cold War” as it was called), was a final one. The fall of the Soviet Union and the former Eastern Bloc was all it took to handily cast aside the struggle of history and place liberal democracy in its position as the one true ideology. 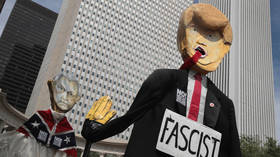 Are you ready for total (ideological) war?

Fukuyama said humanity has reached “not just … the passing of a particular period of post-war history, but the end of history as such: That is, the end-point of mankind’s ideological evolution and the universalization of Western liberal democracy as the final form of human government.”

Looking back at such a suggestion after last year is almost comical. The “final” form of human government has spectacularly failed to meet the moment and has undoubtedly sown the seeds that will see it rebuffed within a generation at most. Prior to 2020, however, it had largely been admitted that liberal democracy was under threat from its rightward flank, namely after the election of US President Donald Trump, but such a situation is actually not new.

As liberal democracy took hold across Europe during the 18th and 19th centuries, it did so largely unable to fend off the backwards forces of the prior political relations, i.e. monarchy. To this day, many European countries maintain a “symbolic” monarch that still, legally speaking, maintains considerable power – even if not in practice. It is indeed proof that the backwards social relations of the past hang in the shadows, perhaps waiting for a time to seize control again.

Where liberal democracy has been the most effective and where the propertied, non-aristocratic elite have enjoyed the most security is the United States of America. There are varying reasons, but, importantly, it has to do with the fact that the Americans never had to deal with the constant threat of monarchy looming in the shadow of their social relations. Instead, while indeed sharing a common history in many respects with Europe, it has the features of a much different and, I would argue, equally, if not more, backwards social relation baked in, namely white supremacy.

The product of colonialism, the United States rose to power in what seized on the genuine progressive forces on the ground and represented the culmination of the imperial projects to that point. It managed to present itself to the revolutionary masses of the former British colonies as a forward motion in history – something that is indeed true – but managed to cling to many of the most backwards qualities that came before; for example, not only continuing, but greatly expanding the genocide of the Native Americans, enshrining the institution of slavery and pursuing the most faceless empire known to history.

Also on rt.com
Slavoj Zizek: Trump’s GREATEST TREASON is the betrayal of populism

Doubtless, progressive currents have pushed the United States to lead in the historical struggle at various points – the Reconstruction Era following the Civil War, the New Deal and the working class current that drove them, to name but a few examples. But even these periods were disunited, co-opted and liberalized. The politics that is emerging today is wide, diverse and much more serious about examining history from a realistic point of view. It is the culmination of these freed people, who are now able to read the materials their ancestors fought for their right to, who can now believe their own eyes, organize and seize political power – even if within the confines of liberal democracy.

This trajectory is a threat to liberal democracy, but indeed one that represents a positive motion and not a backwards one, however, the leadership of the movement behind it lacks an even deeper self-awareness. Their struggle is not their struggle as such; history never ended and the struggle for a human future never died, not in Europe nor anywhere else.

Instead of looking amongst itself, the progressive forces must look to the most exploited parts of the world for inspiration; for example, the push for a “21st century socialism” continued and still continues in Latin America, the push for a prosperous socialism never died in China and the general forces of decolonization across the Global South persist. There is doubtless something to be learned in each case.

As we turn into a new chapter this year, I argue instead for the broadest possible progressive wave to fight for a human future and combat the disaster capitalism of today, a kind of cosmopolitan socialism that does not seek to reinvent the wheel but rather learn from wherever it can to achieve a common goal. Our future very much depends on this.