By Malcolm Kendrick, doctor and author who works as a GP in the National Health Service in England. His blog can be read here and his book, ‘Doctoring Data – How to Sort Out Medical Advice from Medical Nonsense,’ is available here.

We wear masks, goggles, plastic gowns and gloves when we see our residents, and clean everything continuously, but in the last week 18 patients and staff have been infected. It’s worse than in March/April, when we had no masks.

I have often wished that we had another Planet Earth, sitting just next to this one. Everything on this cloned planet would be the same, so we could do randomised controlled trials where we changed something here, but not there, to see what happens. You could, of course, also do it the other way around.

Then we would have a chance of knowing if an initiative really worked, or not, and we would have some proper evidence to support major interventions. I first thought this about mass cancer screening programmes. They have almost all been introduced, for everyone, at the same time.

Also on rt.com
As Lockdown 3.0 descends on Britain, the time for reason and argument is over. Only dissent will save us now

So, how can you ever know if such efforts work, for sure, with no control population to match things against? In the 2000s in the UK, we introduced a thing called the Quality Outcome Framework (QOF). A massive multi-billion-pound initiative under which GPs monitor such things as blood pressure, weight, smoking, cholesterol levels and the use of various medications. They then try to control high blood pressure using statins and advice on weight loss, exercise and suchlike.

How well has it worked? Who knows for sure? Its supporters say it has been a magnificent success. Its detractors suggest it has been, pretty much, a busted flush. It was introduced in 2004, and was reviewed in the Lancet in 2016:

“Although we noted small mortality reductions for a composite outcome of targeted disorders, the QOF was not associated with significant changes in mortality. Our findings have implications for the probable effects of similar programmes on population health outcomes.”

This programme has cost hundreds of billions of pounds to date. It makes up more than a third of the payment to all GPs. It takes up billions of man hours, per year. Yet it has not had any discernible impact on mortality. Has it been disbanded? No. Well, it has in Scotland, but not in England.

Its defenders often claim how bad it would have been if we hadn’t done it. But they don’t know, do they? Because they do not have a cloned world to examine, where the quality outcome framework was not introduced.

In this world, we have watched the reported number of Covid-19 cases spiral upwards in the last month, in the UK and elsewhere. This has happened even though more and more restrictions have been brought in. Indeed, the greater the restrictions, the more places closed to the public, the less that people have been allowed to do, the faster the rise has been.

The counter argument is… it would have been absolute carnage if we had done nothing. Well, you don’t really know, do you? Because we didn’t do nothing.

I work in units full of elderly people, including nursing homes. In one 30-bed unit, everyone has their own room, and they do not leave that room. No visitors are allowed. All the staff wear a face mask, goggles, a plastic gown and gloves when they see (masked) patients in their rooms. We even have an inspector in the unit to make sure we are doing everything by the book – which we are and have been for months. The cleaning of the unit is virtually continuous.

Yet we have just had 10 patients infected, and eight staff, in the last week.

All the rules and regulations, all the PPE wearing and cleaning, has all had exactly, and precisely, no effect. In fact, the current rate of infection is higher than it was in March/April, when we had almost no PPE, when we were told not to wear masks (that NHS diktat was because there were no masks to wear). As soon as we had enough masks, it became mandatory to wear them. At which point, no one was catching Covid anywhere that I worked.

Right now, 50 percent of the staff in this unit have become infected. Thankfully, no deaths and none seriously ill.

At one point, pre-mask, I was merrily coughed on by two nurses who, it was found, both had Covid-19 and went off the next day. I have had six swabs over the months, none positive, and no antibodies. How on Earth have I avoided the virus, when I have been surrounded by it, in all directions – for months? (Famous last words, of course)

My contention here is that we have no idea if lockdown has worked, achieved nothing, or even made things worse. The Chinese are now virtually back to normal – if one is to accept what their news agencies say. They seem to believe it is because they are all wearing masks. Hmmm.

About a month ago I looked at the French Covid figures. They were wearing masks inside during the summer – I know, I was there. Then on August 28, they were ordered to wear masks both inside and outside. At which point, the infection rate immediately fell to zero…

No, hold on, it rose at an astonishingly fast rate. They soon had the highest rate of infections in the world. Which is now falling.

Yes, I know, I know: it would have been far, far worse if they had not worn masks.

Currently, we are being frightened to death by the mass of Covid cases and deaths around Europe and the UK. One country that has been singled out for approbation is Sweden. They did not lock down, at least not to any great extent. They had more deaths (per head of population) than neighbouring countries. But less than England, Spain, France, Belgium, Portugal etc.

Yet they ended up with headlines like this, in The Guardian: “As the Covid death toll soars ever higher, Sweden wonders who to blame.” In fact, there has been almost universal condemnation of Sweden and their lax approach. They are being whipped into line.

Yes, it’s true that deaths attributed to Covid have risen in Sweden, as have cases. But you might be interested to look at the country’s chart of overall mortality, which means the risk of dying of anything. 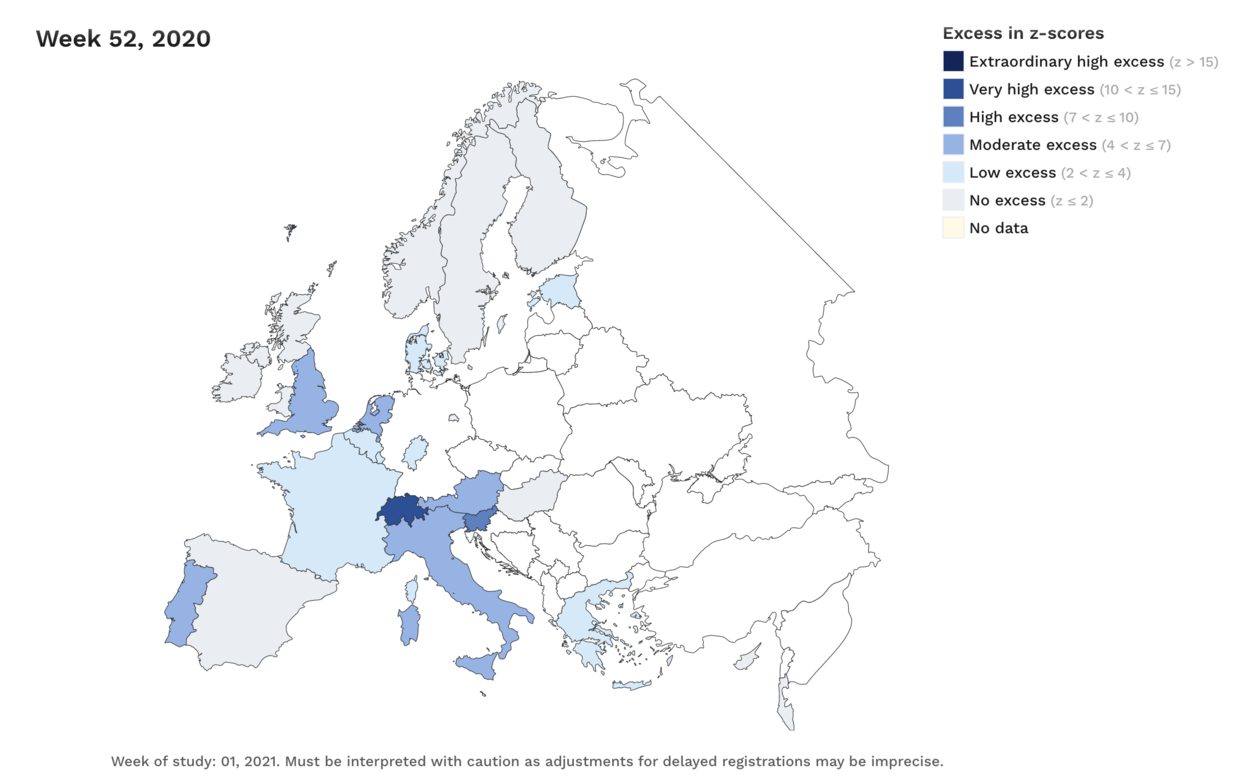 Map showing the weekly z-score for the total population in the data-providing EuroMOMO partner countries from week 1, 2015 until today. ©  EuroMOMO

How does this complete flat line of excess deaths, compare with Covid deaths in Sweden?

As you can see, Covid deaths there are apparently spiralling ever upwards. Higher than in early 2020 when the Swedish mortality rate was very much greater than previous years. So more people are dying of Covid-19 than ever before in Sweden. Yet their overall death rate is, currently, unchanged from previous years.

Up to 277 deaths in one day in January. In a country with a population of 10 million. If this were the UK, the comparable figure would be 1,856.

I do not think I have ever seen figures that make less sense than this. Thousands of people dying of Covid-19, but an unchanged overall mortality rate. There are, I believe, two possible explanations.

Oh, how I wish for my cloned world. I could go there and have a stab at working out which explanation was correct. At present, I just have to go along with whatever rubbish is being spouted.