As innocent bodies pile up, clever lawyers are finding legal loopholes to spare terrorists deportation, the intelligence services are losing track of those on watchlists and killers on whole life terms cause mayhem behind bars.

Terrorist Khairi Saadallah may be settling in for a whole-life prison term but his conviction for the murder of three men and the attempted murder of three more in Reading on a warm summer night last year doesn’t hide the fact that he has played the British government for mugs – and he is not alone.

Trained as a killer in Libya and with a record of criminal offences, prison sentences and serious mental health alerts, the home secretary’s inability to deport Saadallah after his release from prison – on the grounds that Libya is a failed state – two weeks before the attacks, shows just how adept Priti Patel’s despised ‘lefty lawyers’ have become in undermining justice for even the most egregious offences.

Video footage taken by police the day before his murderous rampage shows a shifty, evasive Saadallah in conversation with a policeman who seems determined to adopt the ‘buddy’ approach. Saadallah circles his grim flat and unconsciously stands guard over the area around his bed where a supermarket bag containing a knife bought for murder lies uncontested by the officer. Clearly something is up.

Also on rt.com
Refugee with anti-homosexual history slaughters 3 gay men during Pride Month, but it’s TOO EARLY to speculate about homophobia?

It’s not 20-20 hindsight. It is plain he does not want the policeman poking his nose around. Yet nothing was done and the next day, three men lay dead in a park having been murdered with an executioner’s precision as their killer yelled his devotion to Allah.

Once in court, the killer unconvincingly insisted he was not inspired by religious extremism, despite being overheard saying “God accept my jihad” by a witness to his evil deeds. With that strategy clearly a no-go, he then tried to persuade the judge that mental health issues were the root cause. He, and his lawyers, were fully aware that a court held little sympathy for a cold-blooded Islamist killer, better to play the victim of a failed state or purported voices in his head than admit the truth.

While Saadallah’s lawyers managed to convince the authorities that Libya was no place for their man, it seems the UN-backed Tripoli government was functioning just fine when the UK requested that it extradite Hashem Abedi, the brother of evil suicide bomber Salman Abedi, for his role in the atrocity launched at an Arianna Grande gig at the Manchester Arena.

Abedi was arrested in Libya shortly after the 2017 attack and extradited back to the UK by the Libya Special Deterrence Force in 2019 to face trial. So the reasoning seems to be that when help from Tripoli is needed then it’s deemed a functioning government but when deportation is being disputed, it’s no place to send even the most evil of men.

Also on rt.com
UK cops need to realise that calling a jihadi a ‘faith-claimed terrorist’ will neither stop jihadism nor tackle islamophobia

Instead, we keep them here and they make friends with each other in our maximum security prisons so they can plan attacks on those in charge of guarding them. Just like Abedi did with oddball Parsons Green Tube bomber Ahmed Hassan last May for which the pair, and another accomplice, were today charged with assaulting a prison officer in Belmarsh jail and now face trial in April.

Hassan was never really one to operate under the radar prior to his September 2017 attack and told immigration officials that he had been trained to kill in Iraq by Islamic State jihadists.

Unbelievably, still this failed to raise a red flag and he was allowed to plan and execute a bomb on a packed train that left 50 people injured.

So blissfully unaware of his inclinations was the local authority responsible for this deeply troubled young man that 10 days before he detonated a home-made bomb on a rush hour tube it was reported everything seemed hunky-dory and they were thinking of closing his case file. 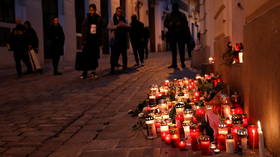 Four more Jihadi attacks – how many more will it take before Europe helps its Muslims tackle the ideology inspiring the violence?

Earlier that year, on April 7, in 82 seconds of mayhem, Khalid Masood drove a car into pedestrians on Westminster Bridge, killing six people – he knifed PC Keith Palmer to death at the gates of Parliament – and injuring 50 more. Again, he was no stranger to law enforcement.

Just a few months later, three terrorists ran amok at London’s famous Borough Market near London Bridge in June, ploughing their van loaded with petrol bombs into pedestrians before running amok, slashing and stabbing at random, killing eight people and injuring 48 more before they were unequivocally dealt-with by heavily-armed police.

ISIS claimed responsibility for the attack carried out by those jihadists: Khuram Butt, Rachid Redouane and Youssef Zaghba. It might have been avoided altogether had the alarm raised by Butt’s brother been passed on to MI5 instead of lost or ignored. The killer was already known to UK police while his accomplice Zaghba was flagged on an international terrorism database.

It was London Bridge again that provided the backdrop when Usman Khan, released from prison on licence after serving time for terrorist offences in 2018, exploited his attendance at a rehabilitation course in November 2019 to wreak havoc, stabbing five people, two fatally, before being shot dead by police on the bridge.

In January last year, Sudesh Amman, who was actually – almost unbelievably – under surveillance by counter-terrorist police at the time, was gunned down as he went on a knife rampage in a south London street, having recently been released from prison following a conviction for terrorist offences.

This highlight-reel of horror with its grim cast of evil, dangerous men prepared to martyr themselves as long as they could take the lives of others with them shows just how twisted and corrupting the skewed ideology of radical Islamism can be. Most disturbing is the one thing they have in common: all those involved – with just one of the Borough Market killers the exception – were known to the police or security services.

But because of the intervals between the various attacks, the focus on the very personal and tragic stories of those killed and injured, and a tendency to move our gaze away from the culprits once they have been dispatched to the great beyond – either at the hands of the police or by their own suicide vests – or to a maximum security prison by the courts, we tend to forget about them.

So we never ask the big questions. How can this have happened again? Why were these foreign nationals and known terrorist sympathisers with serious criminal records allowed to roam the UK free? Why were warnings from those closest to the killers routinely ignored? And why does “known to the intelligence services” seem more like a humiliating excuse than a reassurance?

Also on rt.com
The beheading of a teacher shows Islamic extremists are still intent on destroying us. Here’s 5 steps we must take to stop them

The tempting answer to all the above is that we have no idea of what we are dealing with. And while there are plenty of terrorism experts out there, psychologists with their ideas about what motivates a jihadist, lawyers on the lookout for human rights breaches and police trying to keep an eye on known suspects with their limited resources, the fact that two of these killers who both launched horrific attacks can team up in a maximum security nick, recruit a fellow traveller and attack a prison officer then something is very, very wrong.

Our justice system looks like a soft touch. Sure, Hashem Abedi is serving 55 years and Ahmed Hassan in for a 34-stretch, but as long as they can continue to cause injury and chaos even under the tightest prison regime the UK can offer, we can never be said to have beaten them, nor can their victims be satisfied that they have achieved true justice.

In the eyes of Islamist terrorist murderers everywhere, the British government and the judicial system look weak. And to those who have survived an attack or live in fear of another, there is absolutely no comfort in that.