The country may not have got everything right (and nor does this book), but this Stockholm doctor’s important contribution to the pandemic debate gives vital insights into how we should have dealt with the challenges of Covid.

As someone who tends towards scepticism about anything governments do in relation to health – I always prefer giving people information and the freedom to choose, particularly when it comes to our ‘bad habits’ like smoking, drinking alcohol, and eating the ‘wrong’ foods – I’ve found the illiberal responses by most governments to Covid to be anathema. The idea that most modern democracies have seen fit to lockdown their populations is an unprecedented assault on our liberties.

Also on rt.com
It’s less ‘cry freedom’ and more a crying shame. Why are we STILL in Covid-19 lockdown when deaths are back to normal?

The justification for that assault has been the presence of a deadly virus that could only be contained (until the arrival of effective vaccines) by keeping people apart as much as possible. In such a situation, mere advice is not enough, it is argued. These measures must be backed up by criminal sanctions, enforced business closures, and the creation of a fearful atmosphere in which all other concerns are regarded as secondary to the preservation of lives and health services against the virus.

So I’ve always been open to anyone offering a well-informed alternative view to what is going on. Therefore, I was hoping for great things from a new book published this month by Sebastian Rushworth, a junior doctor working in Stockholm. But despite the title – ‘Covid: Why Most of what You Know is Wrong’ – I’m not sure Rushworth is entirely right, either.

A Swedish perspective is hugely important. Sweden has bucked the trend of other European states in never imposing a lockdown. The measures it has imposed, and others that have been strongly advised by the government, are still significant; it has not been some libertarian’s paradise. But compared to the draconian measures elsewhere, it has still been a much more open society over the past year or so than many other parts of Europe. Sweden’s goal was to live with the virus rather than try to suppress it. The assumption was that a vaccine could take years to deliver. Lockdowns would only postpone cases, not remove the threat permanently.

The assumption in many quarters was that Sweden would be overwhelmed by cases and would, belatedly, admit defeat and introduce lockdown measures. But that has never happened. In terms of the cumulative death toll, Sweden has been pretty average. Looking at a group of countries with similar populations (about 10 million), Sweden’s death toll is lower than Czechia, Belgium and Portugal, and a little higher than Austria and Greece.

However, the usual comparison is with Sweden’s nearest neighbours – Norway, Denmark, and Finland. By that measure, its death toll has been much worse. This, according to advocates of lockdowns, is proof that Sweden got it wrong.

Also on rt.com
So now Sweden and the UK each think they were WRONG about their Covid-19 approaches. They can’t BOTH be right…

But are things so clear cut? Rushworth usefully points to several factors that mean Sweden was at a disadvantage from the start.

First, Sweden imported more cases than other countries because of the timing of its half-term holiday (sportlovet). Or, more precisely, because of the timing of the holiday in Stockholm. Many Swedes take the opportunity to go skiing in the Alps. Stockholm’s sportlovet came when cases in the Alps were starting to take off. The equivalent holidays in Norway, Denmark, and in other Swedish cities like Gothenburg and Malmo, were a week or two earlier. Rushworth argues that this timing meant many cases introduced into Stockholm, which was harder hit than elsewhere. Malmo’s pandemic has been more like Denmark’s than Stockholm’s – at least until winter came again. Another factor, says Rushworth, was seasonality. By the time Covid reached other Nordic countries, better weather meant less spread.

Seasonality clearly does matter. UK cases stayed low throughout the summer of 2020 with relatively few restrictions in place. Norway was perhaps aided by seeing what was happening in Sweden and having the chance to close its border before cases spread. Sweden (and the UK, for that matter) had imported a lot of cases before the gravity of what was happening was really understood.

Rushworth also points to a higher immigrant population in Sweden (19%) compared to Norway and Denmark (14%). Covid is known to hit darker-skinned people harder. There will, of course, be arguments about the impact of poverty and racism, but Rushworth’s argument is that lower levels of vitamin D in these groups was the crucial factor. I’ve written about that idea myself, though I’m still not sure whether it is particularly significant.

He also points to Sweden’s care home population, which he says is 50% larger than Denmark’s. People in Sweden go to care homes only near the end of life, but they do so in bigger numbers than in other countries, says Rushworth. Many countries have failed to protect their care homes effectively over the course of this pandemic, and Sweden appears to have failed not once, but twice. Defending care homes properly shouldn’t need a wider societal lockdown. 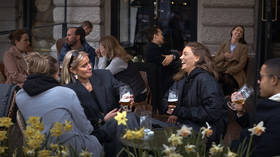 More questionable is Rushworth’s repeating of what is often referred to as the ‘dry tinder’ hypothesis. Basically, because Swedish deaths in the winter immediately preceding the arrival of Covid were lower than in neighbouring countries, there was a bigger pool of old and/or chronically ill people that would more easily be killed by a new virus.

I’m not sure that Rushworth’s case is convincing. Deaths in 2014 were also pretty low, but there wasn’t a huge ‘bounceback’ in 2015. While deaths in 2019 were 2.4% below the average of the previous five years, deaths in 2020 were 7.5% above that average. ‘Dry tinder’ looks like a small part of the story, at best. That said, whatever the merits of this argument, it seems excess deaths in 2020 in Sweden were relatively lower than in the UK (14.5%), so whatever Sweden did, it was not as deadly as some critics seem to think.

Elsewhere, Rushworth raises some familiar arguments that, I believe, seem to have been disproven. For example, there has been wide discussion about whether false positives from PCR tests may have overstated the number of cases and the death toll from Covid. In fact, the test is accurate enough that false positives could only really be an issue at all if wider case numbers are very low indeed.

This has not been, as some (not Rushworth) have called it, a ‘pseudo-epidemic’. We can’t get away from the fact that many countries, like the UK, have had levels of deaths from all causes that are way above what we would expect, even in a bad year for influenza. The most obvious explanation is that a lot of people really were killed by Covid.

There’s something in the air

Rushworth also wades into the arguments about face masks. The evidence of their effectiveness is mixed, to say the least. The best study specifically on Covid is the DANMASK trial, where two groups of people in Denmark were randomly assigned either to wear face masks or not. But all it can really tell us is that those who wore surgical masks were a little less likely (14%) to be infected than those who did not. The difference between the two groups was not statistically significant. However, the case for face masks was never really about protecting the user, but about protecting others if you are, perhaps unknowingly, infected.

He concludes: “Face masks may slightly decrease the risk of spreading respiratory infections outside the household setting. However, it is questionable whether the effect is big enough to noticeably slow the speed at which a highly infectious disease like Covid spreads through a population.” Given that, all along, many commentators have pointed out that Covid is an airborne virus spread through particles (aerosols) that are small enough to linger in the air, it seems unlikely that face masks – which, other than high-grade specialist masks, are incapable of blocking such small particles – would make very much difference to transmission.

That said, the impact of exponential growth needs to be taken into account. Reducing spread by a small fraction can accumulate over weeks and months into significant differences in overall cases and deaths. I think masks may be useful in situations where there is very close contact between individuals and keeping your distance isn’t possible. Nonetheless, the veritable ‘culture war’ that has broken out over masks has been a distraction from something much more important: adequate ventilation. If viral particles are floating in the air, it’s better that they are removed altogether as quickly as possible rather than worrying about wearing masks.

A relative of mine, the principal of a school in south-east England, made this point to me recently. His school was the only one in the local area that did not send any pupils home because of Covid during autumn 2020. Why? He believes it was because the school was “like a barn” – all the doors and windows were kept open, even when it was cold outside. That seems a far better solution than forcing pupils and teachers to wear masks in class.

Also on rt.com
It’s clear that shutting UK schools in the pandemic was a massive mistake that Britain can’t afford to make again

Even if I think he gets some things wrong, Rushworth’s book is a valid contribution to the debate. Like any contribution on Covid, it should be viewed with a sceptical eye. The fact that Amazon dragged its feet before finally agreeing to sell it is worrying. It has been far too easy to close down discussion during this crisis when we need to continually question such draconian government policies. As Rushworth points out, the costs of lockdown are high – for freedom, education, the economy, health, and much more. Better to allow these arguments to be had out in public than censor them.

The complexities of the science, politics, and ethics of lockdown have never been straightforward. For example, some commentators who had previously been opposed to lockdowns have accepted the need for them when case numbers have shot up, as was the case in the UK when the B.1.1.7 variant took off. And the availability of vaccines does change the equation. Short-lived lockdowns where cases seem to be running out of control, and where there is the imminent prospect of vaccines to be rolled out, may be a way of reducing the damage from this virus that might otherwise occur.

Such are the dilemmas of this crisis. But there should always be a full and frank discussion of the merits of lockdowns, that fully weighs up the benefits and the costs.