Two state elections this weekend offer Germans a chance to test the water for alternatives to the long-serving chancellor and her tired coalition, which has done nothing to prevent the economic decline of the former powerhouse.

As Germans prepare to go to the polls in two bellwether state elections this Sunday, a wave of corruption and stagnation threatens to overwhelm Chancellor Angela Merkel’s Christian Democrats – and when it recedes the party that has dominated the country’s government over the last 70 years could be out of luck and out of power.

In the latest scandal to rock the government, State Secretary in the Federal Ministry of Economics and CDU member of the Bundestag Thomas Bareiss is alleged to have asked a manufacturer, Lowenstein Medical, about speeding up the delivery of 150 ventilators to Azerbaijan last April, just as the coronavirus pandemic was gathering pace in Germany and elsewhere.

At the time, hospitals in Bareiss’ own constituency were still waiting for the life-saving equipment which was in short supply internationally after a sudden surge in global demand.

As a Lowenstein spokesman pointed out to news outlet Redaktionsnetzwerk Deutschland, “There was no reason to deliver equipment to Azerbaijan that would have gone to the [hospital] basement there while people died elsewhere in the world.”

While Bareiss admits making the call, he denies he was exerting pressure on the company to prioritise the order from Baku. If nothing else, that shows a chronic lack of self-awareness about the power implicit in his highly-placed role in the German government.

On its own, this is a story familiar around the world. Members of long tenured governments –  even modern democracies – often start to lose their bearings. Tied up in a web of patronage and favouritism, they peddle influence, sometimes for monetary gain and other times just because they can, without bothering to consider how it might look or smell.

Well, it looks bad and it stinks.

But that didn’t save the skins of CDU MPs Mark Hauptmann and Nikolas Loebel or the CSU’s Georg Nuesslein, who all resigned promptly from politics altogether this week after becoming embroiled in separate scandals alleging corruption over lobbying from foreign states and profiteering from face mask contracts with the government. 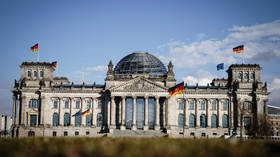 In isolation, each of these cases might be understood but together they are symptomatic of something fundamentally rotten at the heart of the German political establishment. The CDU/CSU have simply been in charge for too long.

Since the start of the post-war Republic of Germany in 1949, the CDU has been in power for a total of 40 years, with the three longest-serving chancellors since then all representing that party – Merkel, Helmut Kohl and Konrad Adenaur.

The sense of entitlement has overwhelmed the alliance but now the German people have realised there is more to life than Mutti, as Merkel is, or was, affectionately known.

The writing has been on the wall since 2017, when the CDU-led government alliance suffered its biggest defeat since World War II and grimly hung on to power by buddying up with the Social Democrats, leaving right-leaning newcomers Alternative für Deutschland as the biggest party in opposition.

The lacklustre electoral display by the CDU/CSU has been followed by an equally dismal performance by Deutschland Inc. While many still talk of a German powerhouse, the reality is that the economy has been underperforming for the last 25 years, with nearly 16 of those under Merkel, and only stands out in the EU because others around them are even worse.

While Germany was above and beyond the greatest beneficiary of the introduction of the single currency, its effective devaluation of the Deutschmark suddenly made prestige products –  like all those luxury cars – affordable to the rest of the world. But the motor industry has moved on and today, the combined value of Volkswagen, Mercedes-Benz and BMW is overshadowed by that of nerdy Elon Musk’s Tesla.

Elsewhere, the German tech industry has struggled to advance fast enough or to keep up with China’s entry into the digital field.

Take the area of solar power, for example, in which it once led the world as a technology pioneer. Germany’s last major solar cell manufacturer went into insolvency in 2017, caving in to Chinese competition in the sector.

Neither of these downturns is necessarily Merkel’s fault, but where once the car and green energy sectors were things for the German leader to boast about, that is no longer the case.

What she can be blamed for is the social crisis that arose from her inaction in 2015 over failing to close the borders to an influx of migration from the Middle East. Germans are still counting the cost of the mass migration that followed and the resurgent rightwing is enjoying steady support with AfD polling at around 10% nationally, not far off the 12.6% it took in 2017, with federal elections still six months off. 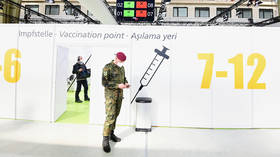 Mutti’s electoral appeal has flagged. Like the closing years of Leonid Brezhnev’s Russia, she too has created what Mikhail Gorbachev called an “era of stagnation,” highlighted by political as well as economic inertia.

Maybe she has poisoned the well for her successor as leader of the CDU, continuity candidate Armin Laschet, who is in urgent need of a boost to his campaign to become chancellor and lead the alliance into the September 26 polls. He’s no shoe-in as his main rival for the post is Germany’s second-most popular politician – behind Merkel – heavyweight CSU leader Markus Soeder.

Convincing CDU defeats in either or both Rhineland-Palatinate or Baden Wuerttemberg this weekend will further weaken his claim, and the polls are predicting SDP and Green successes respectively.

Electoral failure leaves an unwelcome taste behind, and combined with a huge dollop of toxic corruption, the result is unpalatable. Maybe the Germans will decide they’ve had enough of the dish they’ve been given, day after day, year after year.

The appeal of a ‘traffic-light’ coalition – between the SDP, Greens and FDP – might be just the national palate cleanser needed at this point. After all, it has been tested in Rhineland-Palatinate to such success that those involved are looking to continue their coalition with voter backing on Sunday.

Angela Merkel, Armin Laschet and the CDU would play no major role on this new political stage. And right now, that sort of clean slate is probably exactly what Germany needs.

[Verse 1: Allday]
Yeah
My book starts right here
I’m the protagonist, it’s my year
They tell me that’s arrogant as if I care
I don’t even grimace when I get white hair
I don’t ever want to be in bed by nine
In a job that I hate but pretend I’m fine
When I wake up, legs still smell like wine
Give every penny to the friends I find
I’m not trying to build an empire
Just to get by, get high, then die
My perfect life, I’m so over sight
Did I forget to mention I get pussy every night?
And besides, we’re living in an evil age
So listen up to what The Beatles say
Let it be, we’ll be more sane
Then I’ll see you later, Auf Wiedersehen

[Verse 2: Allday]
And I go off land
‘Til the hourglass has no more sand
Talk about love, I am no poor man
On the global campaign in my old tour van
I’m going in a new direction
It’s like Goosebumps ’cause I choose the ending
Fuck the Joneses, no use comparing
You can’t buy a smile with the loot they’re spending
The young buying, love the sun dying
I don’t need money, just the sun shining
A scoop of ice cream and I’ll start smiling
Two scoops piling and I’ll start rhyming
Ripped jeans and I’m sitting on the bus
Thinking ’bout things, they are simple enough
Have a little fun, make a little love
A few years past we’ll be wrinkled up

[Verse 3: Allday]
And the world is mine
The weather’s fucking warm and my girl is fine
I’m about to take this over-d, your foul is mine
I’m higher than heaven having a hell of a time
Vaginas are on the agenda
I meant to go mental forever then end in a stretcher
I’m sent to this earth to go hell for leather
I dreamt of Coachella, go eat in a bed
Are you getting the picture? Yes, I’m a hipster
Don’t care what you think, I’m impressed with your sister
I’ll never be rich but my head’s getting bigger
With a grin like a winner, a head full of liquor
And my friends are addicted to everything bad
Attempting to have a way to never be sad
But it’s tempting me man, it’s the pain, it’s the system we make
Everything can one day end up and be different like, uh

[Verse 3: Q-Tip]
Moving backwards never, that was never the plan
Can I vent? I was content being my own man
Up until that night ill-fated, walking home I was faded
Po puts braces on my wrist like he was clapping his hands
How demeaning, y’all? Who could be blind to racism?
Bring bro bro to me for the brotherly baptism
Instead of slaps, give him the dose of Ab wisdom
He’ll make it out of the jungle some way
Hey, it’s figurative, not a real place you stay
Ay, it’s mind state filled with muck and malaise
Uh, I got direction without using Waze
Submitting myself to praying these days
Yeah, moonwalking backwards, it’s only for stage

[Outro]
Hahaha, look at this motherfucker

[Verse 3: Q-Tip]
Moving backwards never, that was never the plan
Can I vent? I was content being my own man
Up until that night, ill faded, walking home, I was faded
Cocos races on my wrist like he was clapping his hands
How demeaning y’all, who could be blind to racism
[?] girl wrote to me for the brotherly baptism
Instead of slaps give ’em, the dose of ab wisdom
He’ll make it out of the jungle some way
Hey, it’s figurative, not a real place you stay
Ayy, it’s mind scape, filled with fucking malaise
I got direction without using Waze
Submitting myself to praying these days
We walking backwards, it’s only for stage

[Outro]
Hahaha
(Look at this motherfucker)

[Verse 3: Q-Tip]
Moving backwards never, that was never the plan
Can I vent? I was content being my own man
Up until that night, ill faded, walking home, I was faded
Cocos races on my wrist like he was clapping his hands
How demeaning y’all, who could be blind to racism
[?] girl wrote to me for the brotherly baptism
Instead of slaps give ’em, the dose of ab wisdom
He’ll make it out of the jungle some way
Hey, it’s figurative, not a real place you stay
Ayy, it’s mind scape, filled with fucking malaise
I got direction without using Waze
Submitting myself to praying these days
We walking backwards, it’s only for stage

[Outro]
Hahaha
(Look at this motherfucker)