Maitreya Bhakal is an Indian commentator who writes about China, India, the US, and global issues. Follow him on Twitter @MaitreyaBhakal

A key Western propaganda strategy is to accuse others of crimes that they’ve themselves committed. This is seen most blatantly in Western accusations that China is committing “genocide” or “colonialism” in Xinjiang.

Most Western criticisms of China can be categorized under one broad umbrella: psychological projection. It is involuntary, reflexive and Pavlovian; as well as strategic, planned and deliberate. It’s a key pillar of Western propaganda, especially against China. It manifests in accusing others of that which you are guilty of.

Few propaganda campaigns meet the criteria better than the “Xinjiang genocide” narrative. Western history has no shortage of genocide and mass murder – both at home and abroad. Thus, in a natural reversal, many in the West accuse China of genocide. Such accusations are weaponized by the Western propaganda machinery – from the media to Wikipedia – and then projected onto China. Of course, there’s little evidence for any of it.

Also on rt.com
China’s US visit snub is because Biden is increasingly behaving like Trump

The United States of America, the vanguard of Western propaganda today, remains at the forefront of this campaign. The entire nation itself was of course founded on the genocide of indigenous peoples. Thus, in a classic example of projection, the US projects its crimes onto someone else, officially accusing China, its main rival, of genocide.

It is of course an entirely political decision – the US regime’s own lawyers disagree with the assessment.

Not to be outdone, also accusing China of “genocide” is Canada’s House of Commons. Recently, as unmarked graves of indigenous children are being discovered across the country, Canada has sought to divert attention by stepping up its “human rights” criticisms of China. It even went to the extent of delivering a joint statement on behalf of 44 countries at the UN Human Rights Council, which, with no sense of irony, mentioned reports of “forced separation of children from their parents” in China – exactly what Canada itself had done to indigenous children, word for word. Goebbels would’ve been proud.

Such flippant, reckless accusations of “genocide” by Western nations and their legislatures and media are despicable; not to mention a grave injustice to victims of actual genocides. Few diplomatic actions are more irresponsible than making a joke of perhaps the most serious accusation that can be levied on a nation state. 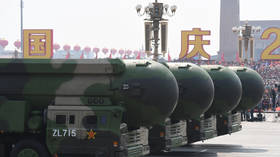 A project of projection

Yet, despite the factual inaccuracy and historical revisionism, such projection nevertheless feels comfortable. Projecting your own guilt on someone else is an easy coping mechanism. It makes you feel better knowing that those “Others” are no better than you are. It helps you avoid coming to terms with your own guilt. This could help explain why so many are willing to absorb and believe it.

As an added bonus it also provides a much-needed diversion from their own crimes, not to mention aids the hybrid war against China.

An old falsehood in the West’s quiver is accusing China of colonialism. When once China was accused of imperialism and even “genocide” in Tibet, with even Hollywood celebrities speaking out, that is no longer in fashion. Today, the same narrative is being recycled for Xinjiang.

Colonialism is defined by economic exploitation and wealth extraction. The colonizer extracts wealth from the “colony,” either by exploiting its labor or natural resources, and ships it back to benefit the home nation. The “colony” becomes drained of capital and sees little benefit from its own natural resources and labor. Consequently, the colonizer grows richer.

Few colonial examples illustrate this better than India, the largest “colony” of the largest imperial empire in the modern world.

When British colonialists first started landing on Indian shores, the subcontinent commanded the single highest share of the world’s economy. In 1700 AD, India had 24.4% of the world’s GDP, the largest in the world. It was the global leader in manufacturing, producing 25% of the world’s industrial output. From the late 17th to the early 18th century, India accounted for 95% of British imports from Asia. The Indian economy at the time was in a proto-industrial state, and if left to its own devices, would possibly have experienced an “industrial revolution” of its own.

Instead, it was Britain that had the industrial revolution – financed by Indian capital. By the mid-18th century, the relative situation between India and Britain was largely reversed, with Britain beginning to replace India as the world’s leading economic and commercial power, leading directly to its superpower status.

India’s share of world GDP had come down from 24.4% to 3% when the British left in 1947. The same study also estimates that an unbelievable 1.8 billion people died from deprivation and famines in 190 years – between 1757 and 1947. No wonder then the British House of Commons projects Britain’s crimes onto someone else – officially accusing China of genocide by passing a non-binding motion (Britain having committed no shortage of crimes against China as well). There is little doubt that if India today was the rising power that China is, the West would’ve concocted similar accusations and projected their crimes onto India instead.

Also on rt.com
Is the US using the Uighurs’ ‘forced labour’ issue to undermine the Chinese on trade?

Today, the “Xinjiang genocide” narrative has been largely debunked, with even the most wicked propagandists split on whether the term is appropriate.

Accusations of colonialism are no less farcical. While colonialism is defined by economic exploitation and wealth extraction, China’s policies in Xinjiang and Tibet, while far from perfect, are the opposite. These regions have become exponentially richer than what “democratic” countries like India achieved for their border minority regions, or indeed, for their whole countries. China recently announced the elimination of extreme poverty, including in Tibet and Xinjiang.

In 2020, Tibet had the fastest economic growth among all of China’s 31 provinces and administrative regions. Per capita income has doubled in the last 10 years. Primary school enrollment is nearly universal. The unemployment rate is below 4%. Nearly all higher-education graduates have a job.

Beijing has invested about 2.35 trillion yuan in Xinjiang over the past seven decades. GDP grew at an annual rate of 7.2% from 2014 to 2019. Per capita disposable income has multiplied more than 100-fold in 40 years. Primary school enrollment is 99.91%. 99.7% of residents are covered by basic medical insurance. Colonialism indeed.

Of course, none of this means that Chinese rule is legitimate because it has made these regions richer. Xinjiang and Tibet are as much part of China as Texas or Florida are of the US. Yet, for decades, Western propaganda has desperately tried to poison the well and portray Chinese rule as illegitimate. The US has directly funded Tibetan and Uighur separatists for decades.

Normally, one would assume that the more serious the accusation, the more overwhelming the evidence. But in this case, it’s the opposite. No wonder few outside the West are buying it. The Xinjiang narrative remains one of America’s weakest propaganda campaigns.

The Western cabal often tries to slander China at the UN by releasing statements criticizing it. China and its allies then release counter-statements in response. The two groups have been exchanging official barbs over the last three years, at numerous UN sessions. In every single such exchange, the pro-China side always gets more support than the pro-US side – every single time.

In the latest back and forth, where Canada fired the opening salvo with its joint statement last month, the result was an overwhelming backlash of anti-imperialist solidarity – a whopping 90 nations released statements supporting China and opposing any interference in its internal affairs. The international community stood with China against the US-led Western onslaught.

Also on rt.com
US-China confrontation may only get worse under Biden as Beijing switches into ‘war mode’ in face of western criticism & sanctions

Expectedly, this elicited complete radio silence from Western media. It could only keep shouting over the rooftops about how “44 nations criticize China at the UN” – in story after story, with no mention of the nations supporting China. After all, propaganda by omission remains the easiest and oldest form of propaganda.